In a quiet street off Farringdon in an unremarkable building called the London Metropolitan Archives – which I confess I had never heard of before – a remarkable document is on display. It is dated 10 March 1612 and it contains one of six surviving ‘authenticated’ signatures belonging to William Shakespeare. The document, under glass in a dimly lit room, is the deed of purchase of the only house Shakespeare ever bought in London, in Blackfriars, somewhere near where the Cockpit Pub now stands on the corner of St Andrews Hill and Ireland Yard. Shakespeare never actually lived in the house apparently and took out a mortgage on it that was still unpaid at his death two years later.

The Cockpit Pub, not there in Shakespeare’s time

Shakespeare and London is the name of this small but fascinating exhibition running at the LMA until 26 September. I found it quite by accident while googling ‘Shakespeare in London’ before taking my summer school students on a Shakespeare walk through the City and Bankside. As I explain at the start of the walk there actually isn’t anything directly relating to Shakespeare remaining in the City, thanks to the Great Fire and the Blitz, so it’s a bit of a ghost walk really: here is where Shakespeare probably lived, here is the cathedral that was not there in his lifetime, on this corner or thereabouts was the house he bought and this plaque commemorates the building that’s no longer there that housed one of the theatres Shakespeare worked at. A bit tenuous, you could say.

Not the cathedral that was there in Shakespeare’s time

But according to the London Metropolitan Archives Shakespeare’s spirit is alive and kicking all over this great metropolis. Apart from Lord Nelson and Winston Churchill there are more pubs in London named after Shakespeare than any other person. There are statues of Shakespeare in Westminster Abbey, Southwark Cathedral, Leicester Square and Love Lane, in the City. 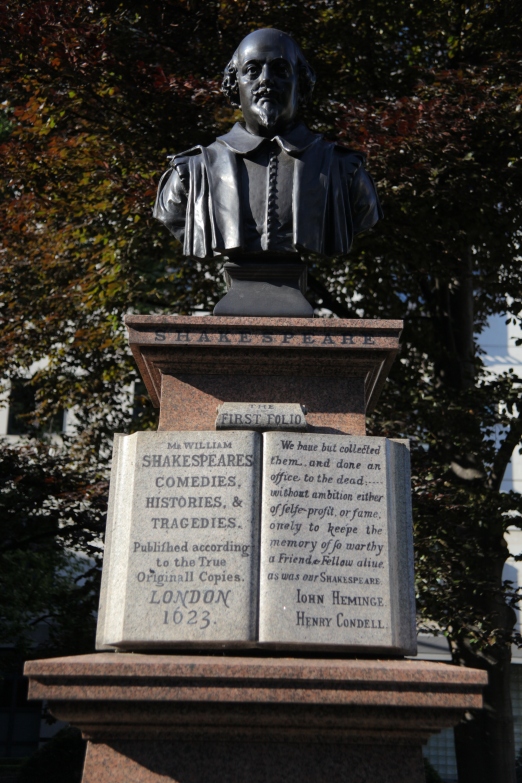 Shakespeare statue and memorial to Heminges and Condell in the City

There are streets and buildings named after him, the newest and most famous of which is a replica of one of his original workplaces.

The LMA exhibition also contains a fascinating film about the building of the new Globe, original maps of 16th and 17th century London and Hogarth’s famous portrait of the actor David Garrick as Richard III. There is an entire wall of portraits of Shakespeare, only two of which ‘have traditionally been accepted as representing a true likeness’, since as the exhibition brochure points out ‘Surprising though it seems to our modern image conscious sensibilities, none of Shakespeare’s contemporaries left a written description of his physical appearance’.

The exhibition also contains records of a ‘burglary on the house of Cuthbert and Richard Burbage’, Shakespeare’s colleagues at The Theatre and later The Globe, and a letter from the Lord Mayor of London to the Lord Chancellor, dated 12 April 1580, in which he said ‘ … He thought it his duty to inform him that the players of plays, used at the Theatre and other such places, and tumblers and such like, were a very superfluous sort of men, and of such faculty as the laws had disallowed; that the exercise of the plays was not only a great hindrance to the service of God, but also a great corruption of youth, with unchaste and wicked matters, the occasion of much incontinence, practices of many frays, quarrels, and other disorders, within the City. He therefore begged that order might be taken to prevent such plays, not only within the City, but also in the liberties.’ 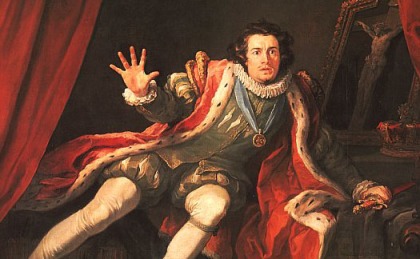 There is also an order dated 1612 from Middle Sessions of the Peace abolishing the practice of the after-show jig, which followed every performance of every Shakespeare play, even the tragedies – a tradition the new Globe has revived (though their jigs tend to be pretty inoffensive). This was the result of complaints received about ‘certayne lewde jigges songes and daunces’ at playhouses where ‘divers cuttpurses and other lewde and ill disposed persons in great multitudes doe resorte thither at th’end of euerye playe many tymes causing turmultes and outrages’. Failure to comply meant imprisonment for all players who ‘persiste and conynewe their sayd Jiggs daunces or songes about sayd playe-houses’. This was not long before Shakespeare retired, and perhaps was the reason for his retirement. (Only kidding)

The exhibition is free and runs till 26 September. For further information go to http://www.cityoflondon.gov.uk/things-to-do/visiting-the-city/archives-and-city-history/london-metropolitan-archives/news-and-events/Pages/shakespeare-exhibition.aspx