I read about this book on the website of the Museum of London Archeology. It’s written by an archeologist, Julian Bowsher by name, and tells the story of the discovery of remains of playhouses discovered in London recently and dating back to the ‘golden age’ of theatre in Shakespeare’s time. 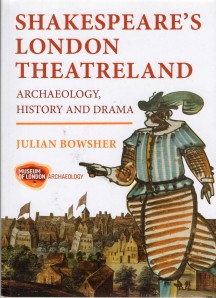 It is an accessible book, nicely jargon-free and very readable and, to someone like me, fascinating. I had no idea for instance that there were so many playhouses built in the latter part of the 16th century other than the ones we know about: The Theatre, which I had erroneously thought was the first purpose-built playhouse to be built in England since Roman times (I blogged about it here), The Curtain, The Rose, the Globe, The Swan, The Hope and The Fortune. Most of the others were short-lived, or there’s not much known about them. I also didn’t realise how many playhouse-builders lost so much money, or got entangled in complex and lengthy disputes, though it doesn’t take a genius to realise that running a theatre commercially has never been and never will be a job for ordinary mortals.

It may be my perception but it seems as though contemporary interest in old playhouses really began with the discovery of the remains of The Rose Theatre on Bankside in 1989. 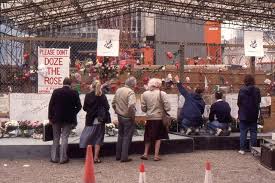 I can remember the outcry when, having discovered a surprisingly large section of the theatre’s foundations between the demolition of one building and the development of another, the powers that be were about to allow the new building to be built right on top of them, obscuring them and presumably demolishing them all at once. I remember how the guiding lights of theatre at the time, headed by Dame Peggy Ashcroft and the local MP for Bankside, Simon Hughes, came and camped on the site in protest at the redevelopment, and won. (The foundations are preserved and the new building went ahead without disturbing them.) Ever since then the MOLA  – The Museum of London Archeologists – have been hard at work uncovering foundations of all the theatre mentioned above, with the exception I believe of The Swan, which is on the site of Sampson House, not far from the Globe and the Rose, which has been too thoroughly gutted over the years. 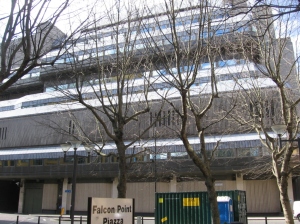 The Hope Theatre, in The Bear Garden, round the corner from the new Globe, has been hidden behind hoardings for years now, and I was quite distressed the other day when I walked past to see it is now a demolition site. Bowsher’s book tells us however that the site – which had a dual purpose as a playhouse and a bearbaiting ring – was excavated ‘between 1999 and 2000 but very little was found, as most of the building lay outside the site limits’. What they did find were the remains of piles of animal bones, legacy of the bear-baiting. 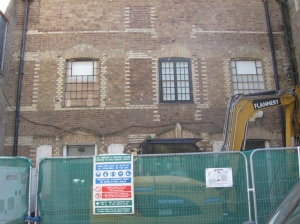 The book includes a number of walks around Shakespeare’s London, to sites of old playhouses, inns and bear-baiting rings, from the City and West end to Greenwich and Hampton Court. It is published by  Museum of London Archeology and costs £20. Much recommended.

For more on MOLA and its excavations of playhouses visit the Museum of London’s website HERE: