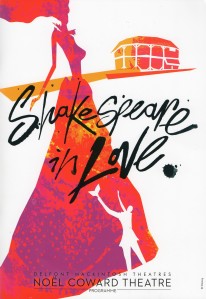 One of the many joys of Tom Stoppard and Marc Norman’s screenplay of Shakespeare in Love is the way it takes the p*** out of the acting profession – with its preciousness, its silly rivalries and ridiculous rituals – while at the same time spellbinding us with theatre magic. One of the joys of the stage show is that it – or rather the adapter Lee Hall – retains the wit and magic of the original and adds some of his own.

I wasn’t sure in the beginning if the wit wasn’t veering a bit towards slapstick. Shakespeare appears not to be able to write a complete sentence, and has to rely on his fellow playwright Christopher Marlowe to write his sonnet for him and the actor Ned Alleyn to give him the title of his play. The motley group of actors auditioning is straight out of panto. There’s even a scene borrowed from Cyrano de Bergerac where Marlowe prompts Shakespeare as he stands beneath his Juliet’s (Viola de Lesseps’) balcony clumsily attempting to woo her with poetry. But as Shakespeare regains his muse and his senses so does the play.

It’s an inspired choice to have Declan Donnellan and Nick Ormerod of Cheek by Jowl to direct and design respectively; they of many productions of minutely observed and forensically detailed Shakespeare. There are cheap gags but there are also moments of stillness and profoundly moving seriousness, as in the final death scene from Romeo and Juliet, which is played and performed as written and which rendered the otherwise up-for-a-thoroughly-good-time audience totally silent. The cast of thirty or so is largely unknown, though I recognised Paul Chahidi from playing Maria in the all-male Globe Twelfth Night, Ian Bartholomew from Oh What a Lovely War at Stratford East earlier this year and the glorious Anna Carteret – who never descends from her Olympian balcony – as Queen Elizabeth. But the younger ones are unknown (to me at least). Tom Bateman is a virile, tender and funny Shakespeare, and speaks the poetry beautifully. Lucy Briggs-Owen as his love and muse Viola seemed a tad fidgety and overwhelmed by the space, but the moments between them are sweet and funny and as romantic as they need to be. Otherwise I particularly enjoyed David Oakes as a dry-as-a-bone Marlowe and Alistair Petrie as a gloriously understated Wessex. 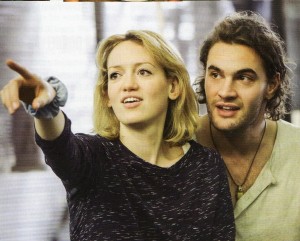 The set is a simple galleried theatre, plain wood, that moves up and down stage and represents the two theatres (the Rose and the Curtain) plus Juliet/Viola’s balcony and the ship on which Viola de Lessings finally departs from England to her new life in Virginia with the tight-arsed, ludicrous Earl of Wessex. The cast is huge and includes four versatile musicians, one with a cello strapped to him and one of them singing in counter tenor.

Oh, and there’s the dog. Of course. Not a major role but shaggy and adorable, and with his own particular brand of curtain call. 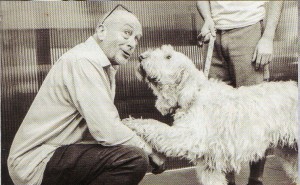