The Wellcome Collection has changed a tad since I last visited it on the Euston Road here in London. It now boasts a smart new cafe and a book- and gift shop on the ground floor, and exhibitions, including the Institute of Sexology, are upstairs.

‘The Institute of Sexology’ is a candid exploration of the most publicly discussed of private acts. Undress your mind and join us to investigate human sexuality at ‘The Institute’, the first of our longer exhibitions. Featuring over 200 objects spanning art, rare archival material, erotica, film and photography, this is the first UK exhibition to bring together the pioneers of the study of sex.

This makes it sound rather more interesting than it is. One of the problems is the exhibits – artefacts, manuscripts, charts and so forth – are so small you have to press your nose right up against the glass to see them, which isn’t easy when it’s crowded. While I’m not a curator and I’m not sure how I’d have done any better, I wanted more of an overview of changing sexual attitudes, both personal and ‘official’, over the centuries. I would have liked to know why for example the ancient Greeks and Romans, and the medieval Indians and Japanese and others, produced so many erotic artefacts and sculptures depicting sex in all its forms, while in more modern times homosexuality was declared illegal and naked statues sometimes had their naughty bits covered up. What does that say about us?

There are letters written to Marie Stopes following the publication of her book Married Love expressing outrage and disgust, and delight and gratitude, but no indication what her responses were, if she did respond. There is a strange film featuring the theatre director Neil Bartlett explaining why he was wearing what he was wearing, and what he carried in his briefcase, and what effect he had on the students he was teaching at the time (they seemed to suddenly recognise their homosexuality, their parents too; though I did see the latter half of the film before the beginning, so I may have got the wrong end of the stick); which I think was in reference to ‘Clause 28’ in 1988, which forbade the promotion of homosexuality in education. But I could see no sign of the Kama Sutra, or anything about the Sexual Offences Act, which decriminalised homosexuality in 1967. 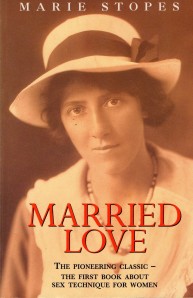 Still I am grateful to the Wellcome Trust. They helped us towards a workshop on The Human Body many years ago when we were running The Children’s Musical Theatre of London. And they made my kids squeal with delight when, even more years ago, they were able to grab hold of the small intestine of a lifesize dummy and pull and pull until they were almost outside the front door.

The exhibition runs until September 2015 and will evolve throughout the course of the year (says the website), so perhaps it’s worth visiting again, hopefully when it’s less crowded.

One thought on “The Institute of Sexology”