The lockdown caused by Covid19 has produced some remarkable innovations on the part of performers, directors, writers and producers. In addition to ISOLATION STORIES (see my previous blog), there has been a similar series called UNPRECEDENTED, the glorious (if slightly niche) STAGED, starring Michael Sheen and David Tennant (or David Tennant and Michael Sheen) and a rehash of Alan Bennett’s TALKING HEADS, all of which have been produced during lockdown, with social distancing, and are being shown on our TV.

In the theatre, the OLD VIC has produced a live social-distanced production of the play LUNGS, performed in the theatre to an empty auditorium by Claire Foy and Matt Smith. Their rather cumbersome booking procedure proved to be too much for me, but it was obviously a huge success as they kept adding performances, and hopefully the income will go some way towards assuring the Old Vic’s future. Performing till 4 July, tickets available for 4 July only here: https://www.oldvictheatre.com/availability/lungs-in-camera

But surely the most remarkable achievement of all has to be Original Theatre’s online lockdown production of BIRDSONG. Adapted from Sebastian Faulks’ novel by Rachel Wagstaff from her stage version, this full-length production was created by actors in isolation filming in their own homes, in full costume and makeup, in front of ‘green screens’. We only ever see one actor at a time, but the interaction between them is so realistic you forget they are not in the same room, or trench. Backgrounds are superimposed on top of their bookshelves (or green screens), and sound effects were added in post production. For a glimpse into how they did it, see here: https://originaltheatreonline.com/. 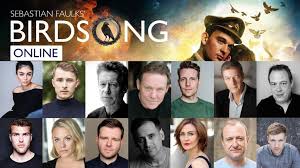 The cast of BIRDSONG online (theatreweekly.com)

Which only goes to show despite the current dire circumstances, and a certain lack of support on the part of our government, you can never ever keep a good creative down.

BIRDSONG is screening until 4 July in the UK only. Tickets cost £15. For bookings, go here: https://www.birdsongonline.co.uk/

One thought on “THEATRE IN LOCKDOWN part two – BIRDSONG”