Protasov’s gate is stuck half open, which is unfortunate bearing in mind what happens at the end of the play. It seems his front door must be stuck open too seeing the amount of visitors he gets. Apart from his wife and his sister Liza there’s Melaniya, who prostrates herself in front of him, offers to give him all her money and is then humiliated when he smashes her eggs; her brother Boris, who loves Liza, Protasov’s artist friend Vageen and Protasev’s ‘nanny’, who does as all Russian nannies do – stomps around complaining and fussing over her charge (and his sister) and gets verbal abuse in return. There is the pawnshop owner Nazar and his son Misha (played incidentally by actors with the same surname, father and son perhaps?) and, less welcome, the man who beats his wife because he is desperate and unemployed. 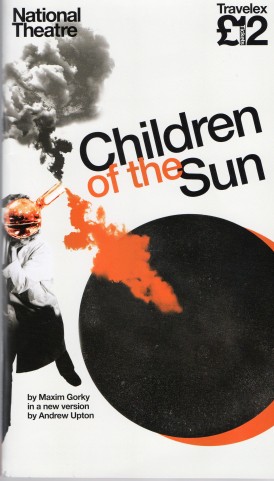 Children of the Sun (at the National Theatre) is definitely a play of two halves. Adapted by Andrew Upton (artistic director of the Sydney Theatre Company and married, incidentally, to Cate Blanchett) it takes a long time to get going, which is a shame as some members of the audience (including my neighbours) walked out at the interval and missed a blazing second act. Beyond the penetrable walls of Protasov’s house trouble is welling in the streets of 1905 Russia but nobody except his increasingly troubled sister seems aware of it; and like many honest and right-minded souls she comes across initially as a bit of a bore. Protasov himself is too immersed in his scientific experiments to take any notice of anything, including his wife. Though once she gives him a piercing piece of her mind he does an extraordinarily unmasculine thing: he listens.

Upton’s adaptation and Geoffrey Streatfeild’s playing probably make Protasov more sympathetic than he’s supposed to be. I did wonder if the modern anachronisms were more intended to amuse (and shock) than remain true to Gorky’s original intentions (though I’ve never read nor seen the play before). Once again it struck home to me how much more flexible writers are allowed to be with plays written in a language that is not English. (See my blog on this Paradox).

Anyway the second act of the play is devastating, thanks mostly to Emma Lowndes as Liza and Justine Mitchell in particular as Protasov’s wife. You may have to wait till the very end to see the National in full explosive mode, but there’s wonderful stuff here, so long as you can survive the first act.