I’ve blogged before about our newly awakened consciousness of London’s theatrical heritage, thanks for the most part to the archeologists at the Museum of London, aka MOLA. (Click here for previous blogs)

The first, and the most astonishing find in recent times was of the Rose Theatre on Bankside, in 1989. Ever since then it seems if there is any new development happening on a site of what could be historical interest the archeologists are permitted a certain time to excavate it before the building continues. This happened some years ago on the site of what was (arguably) the first ever purpose-built playhouse in London, in Shoreditch, call The Theatre. It looked like this:

The Theatre MOLA excavations in 2010

The Tower Theatre were supposed to be building a new theatre on the site but they ran out of money, so it looked like this: 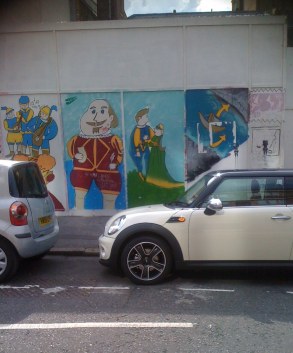 Eight years after excavations first began it looks like this: 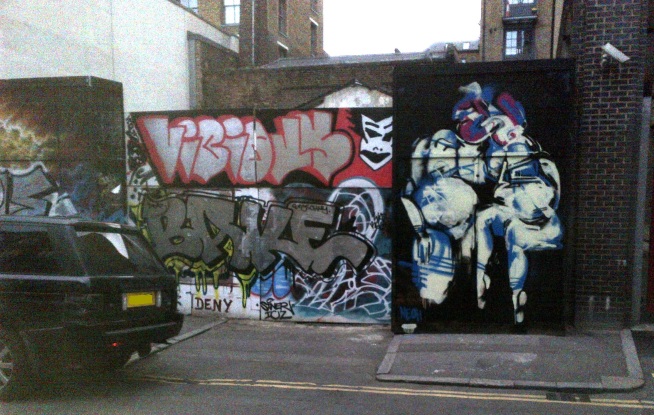 Which is a crying shame as while arguments continue over who gets to own and develop the site no one gets to see any of the Theatre’s original foundations so meticulously excavated all those years ago.

Along comes the Curtain Theatre, just down the road from the Theatre. Currently under excavation as I write this by MOLA, I was privileged to be able to visit the site yesterday – but strictly not allowed to take photos – as part of a Shakespeare 400 walk called ‘Rogues and Villains of Elizabethan Theatre’.

Old buildings viewable behind the hoarding from the outside (Hewett Street)

So far most of what they have discovered in this huge site is 18th century, but there are sections of it that just could be the remains of the Curtain Theatre itself. It is all very exciting, and whatever they do uncover will be preserved as part of the building’s development, which will I believe also include a playhouse.

There will be more news about this site when excavations end in June.

For more information on MOLA and the Curtain Theatre click here: