Peter Nichols always was my favourite living playwright, and still is, even though his plays are rarely produced nowadays.  He writes about difficult topics – much of it from his own life  – yet manages to be both seeringly funny and heartbreaking at the same time. 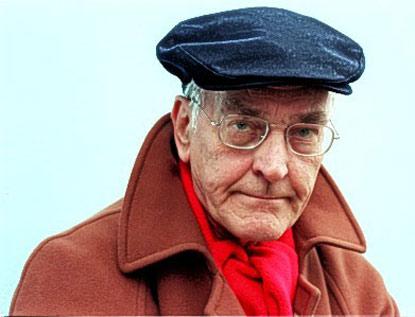 His best-known play is probably A Day in the Death of Joe Egg, about a severely disabled child, based on his own experience as a young dad. My favourite – and, I was interested to hear, his also – is Forget-me-not Lane, about his childhood growing up in Bristol with his travelling salesman father, nickname ‘Hitler’, and his long-suffering mother. What you might call the British Death of a Salesman. Here again he manages to write about dislikeable people (his father) with compassion and understanding and even a kind of empathy. However harsh the subject, however much he takes the micky out of his characters, his plays are overlaid with great humanity, and a strange affection for human vulnerability and weakness.

Bearing all that in mind it’s surprising to hear he was known as a bit of a curmudgeon, with a reputation for complaining about things in public – such as, for instance, a time when he was commissioned by the National Theatre to write a play and subsequently ignored, even snubbed. So it was an especial pleasure to attend what was described as a ‘panel discussion’  at the British Library celebrating ‘Peter Nichols at 90‘; to see he is still alive, well, lively, with an amazingly retentive memory and not in the least curmudgeonly. The ‘discussion’ – more like a celebration of him and his plays – was chaired by the director Michael Grandage and featured readings from Stephanie Cole, Roger Allam, Sarah Woodward and Sam Swainsbury in front of a packed audience of stars from stage and screen, and Michael Blakemore.

What a privilege. I am only sorry he has given up writing plays. There were a lot of young people in the audience, some of them directors apparently. As Michael Grandage suggested, some of them may be moved to give his plays a new and much-deserved airing.